“Who wouldn’t be a mountaineer! Up here all the world’s prizes seem nothing.”

“Mountaineers are caught in a trap of their own making. To feed their own compulsion to climb, mountaineers have initiated and participated in various endeavours that attract an ever-growing number of people to mountain regions. Climbing motivations have become increasingly complex, with economic concerns playing a more central role. This has led to a loss of meaning and value in the experience as mountaineers confront at each step of their travels the adverse impacts of their presence.”

This is what this blog was heading out for from its beginning: cognition/knowledge. Yeah sure, but to reach that, it was supposed to be an empirical foundation for a critical theory of climbing and/or mountaineering, constituted of fragments found whenever and wherever on a quotidian basis that illustrate the deeper meanings and relations of this risky, recreational touristic and sportive activity.

This theory is now available, with specific emphasis on North America, or the U.S. respectively. And I present to you not without any proud a slightly modified (I corrected some spelling mistakes and a footnote) version of my BA thesis on “the social role of climbing in U.S. society” entitled with a small deviation “Odysseus as a role model,” that follows the question of “why people climb” – which was also its original, submitted title – and aims on a social, or, critical theory of climbing.

Climbing and mountaineering, as ideal types of adventure sports have long been and still are often mystified. Although analyzed to a large extent with respect to motivations, the social causes and purposes remain widely unidentified. One common notion is that the sports is useless, which is expressed prototypically in George Mallory’s famous statement “Because it’s there” as a response to the question of why he wanted to climb Mount Everest. Social theorists have only to a limited extent managed to go beyond this notion and to question underlying motivations and their social and psychological origins, as well as the functionality of the sports. The image of freedom that is commonly associated with the activity itself needs further substantialization. Climbing as an adventure sport is not useless. It serves various purposes and has social functions. Although climbing in the U.S. has not played a large role for long, this changed with the popularization of rock climbing in the Yosemite Valley in the 1960s. Nowadays both alpine and rock climbing can be regarded as established forms of outdoor recreation in the U.S. and elite American climbers are recognized internationally. In the present work the large role of this cultural field for North America and its economical importance are shown. By investigating the historical development of the sport, it can be connected with important cultural traits such as the frontier condition or the appreciation of wilderness and its philosophical exponents in thinkers like Thoreau and Emerson. The purposes and functions of alpinism and climbing for the U.S. society, as well as the motivations of people who practice them are analysed. Motivations are numerous and overlapping. For this purpose works of Critical Theory of the Frankfurt School are highly instructive in showing how modern subjectivity is constituted in relationship with nature and under socio-psychological constraints. With this approach that involves sociological as well as psychological perspectives and draws on the works of theorists such as Adorno, Horkheimer and Marcuse as well as on Bourdieu, it is possible to follow the thesis that mountaineering and climbing, together with several other adventure sports, serve not only the reproduction of labor power, the sublimation of socially induced suppression of instincts (drives) and the accumulation of social capital, but also, in a more general sense, the formation of modern subjectivity by the contestation with and domination of nature. Climbing can thereby be regarded as a need that is felt to compete with the forces of nature and in this respect as a substitution of the functional role of war or, as specific to North America, the frontier and wilderness condition. 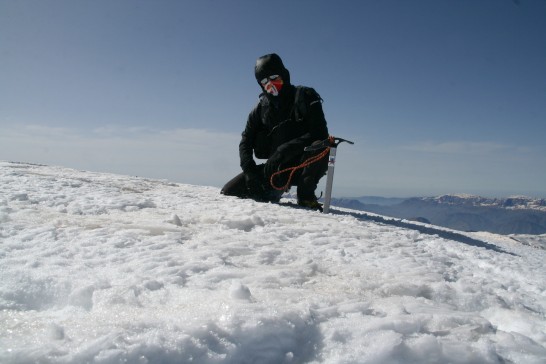 Keep the dream alive. You know what I mean.